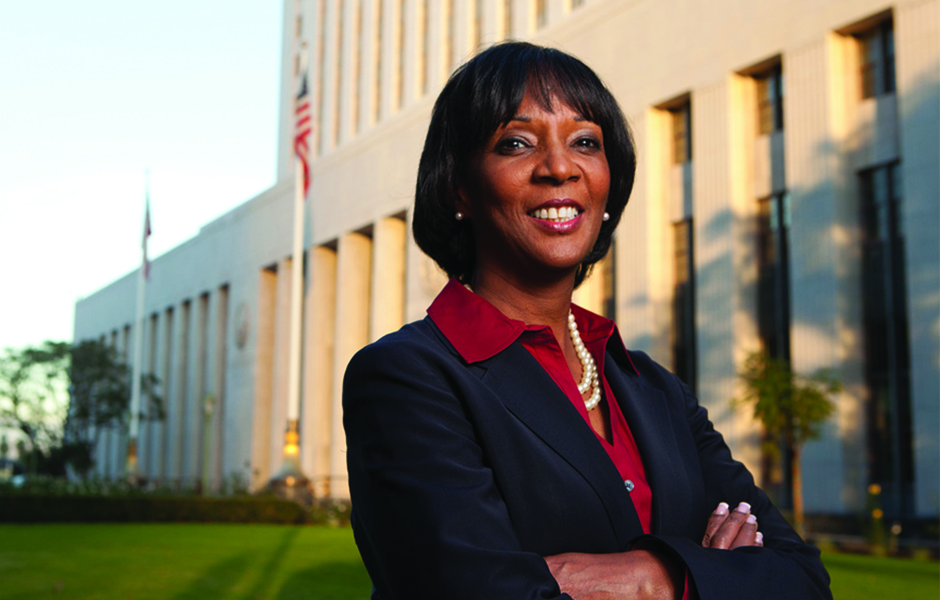 When UC Irvine alumna Jackie Lacey announced that she was running for Los Angeles County district attorney, many people thought she didn’t stand a chance. In the 150-year history of the office, there had never been a female or an African American in the top job.

“The fellas,” as Lacey jokingly calls the former district attorneys, “all looked alike.”

That changed on Dec. 3, 2012, when she was sworn in as the county’s first female and first African American district attorney after prevailing in the California general election. Lacey now oversees the nation’s largest prosecutorial office, with about 1,000 deputy district attorneys, 300 investigators and 800 support staff.

She’s come a long way–from a girl growing up in a working-class neighborhood of LA to chief prosecutor–and UC Irvine played a key role in her transformation.

“This university caused me to become a lawyer,” she says. Lacey returned to her alma mater shortly after the election to give a talk at the Cross-Cultural Center about her undergraduate days and to receive UC Irvine’s first Distinguished Professional in Public Service Award.

She enrolled here as a psychology major in 1975 with the idea of eventually earning a teaching credential. But a summer job at a local elementary school convinced her that teaching wasn’t her calling.

“You have to be good with kids in order to spend every day—every day—in a classroom with 30 of them,” Lacey says.

Unsure of her direction, she took an introductory law course her junior year that included sitting in on trials at the Santa Ana courthouse.

“I fell into a class that would change the trajectory of my life. There, I discovered that I loved being in the courtroom,” Lacey says. “For me, it provided so much theater… You never knew when a curse word was going to come out of someone’s mouth and cause you to laugh when you shouldn’t laugh, or when a judge was going to say, ‘Knock it off,’ or when the litigants would fight. I liked that edge of never knowing what was going to happen.”

She also was inspired by one of the class’s guest lecturers, an African American lawyer named Irma Brown, now a Los Angeles Superior Court judge.

“It was something about that woman’s mannerisms, the passion she had in her voice, the way she looked, the fact that she had come from a background that I had come from, that made me say, ‘I could be like her. I could do that,’” she says.

Lacey was the first in her family to go to college. Her parents both fled discrimination in the South in the 1950s and found jobs in Los Angeles, where they met. Her mother, Addie Phillips, worked in a garment factory, and her father, Louis Phillips (now deceased), worked for the city, cleaning vacant lots.

When Lacey told her parents she wanted to be a lawyer, they were thrilled. The change in career choice proved a turning point.

“Like everything in my life, I judge whether I’m making the right decision… by whether or not the doors are opening up,” she says. “If they are, it’s probably the right path.”

Lacey hopes her historic victory will encourage other minorities and women to pursue careers in law enforcement. Her message to the UC Irvine students—many of them young African Americans—who turned out for her recent talk: “Whatever your dreams are, whatever your purpose in life, whatever your calling… step out in faith and go forward. Stop waiting. Something that seems at first to be impossible may merely be difficult. Do not be afraid of the difficult. Keep going.”

As a part of the Department of Cognitive Sciences, UCI’s undergraduate psychology program provides students with a strong foundation in general psychology covering areas such as development, perception, learning, memory, and cognitive processes.

Students in the department may become involved in research by working with faculty members in areas such as cognitive neuroscience, vision, hearing, attention, memory, language, development, and decision-making.

The psychology major provides a suitable background for post-graduate training and careers in all branches of psychology.

Alumni have gone on to pursue careers in some of the best research universities in the world, as well as in government and industry. The major also provides training in critical thinking, experimental design, and data analysis—skills that are important in a wide range of other careers including law, as Lacey found. Cognitive science skills are valued in applied settings including high-tech startups, research consultancy companies, and government science and technology laboratories.